Another day in Portland. I set the GPS for OMSI and headed off there. Was a little worried when I arrived and say many many school busses lined up outside and huge crowds of kids assembling. Uh oh. However my trek across the car park was interrupted by the sighting of railway carriages, so I went to investigate. Nice line up of iconic and famous "name train" carriages, including ones from the Southern Pacific "Daylight" series, and the Great Nothern's "Empire Builder". Plus some straight stainless steel corrugated side carriages. Was nice to see all these up close through the deer fencing. 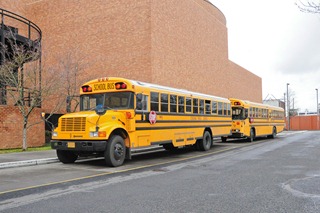 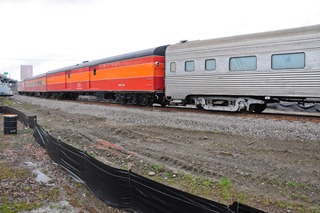 Went into OMSI and yep sure enough there were thousands of kids. I guess I was a little disappointed because I expected more of a museum (as in Oregon Museumof Science and Industry) however it was very much an educational facility designed to teach children about various scientific phenomenon (think Science Alive here in Christchurch). And in that respect it did very well, with lots of very well designed "hands on" exhibits.

For someone like me, more interested in famous artefacts, it was a bit of a let down, however I did get to see the rocket engine from an early phase of the US space program, and a cut away view of a jet engine from the first mass produced American jet fighter, both of which were very cool, and relatively child free. 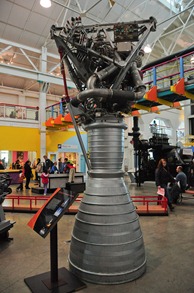 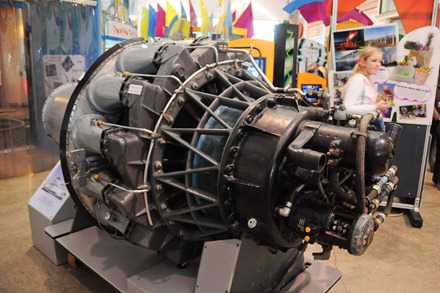 There was however one big redeemer… 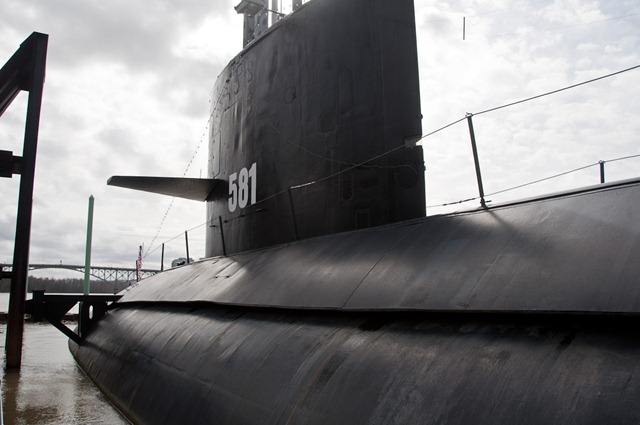 Yes they had a full, semi-operational US Navy diesel submarine parked outside, and as you had to pay extra to see this, it was definitely child free! I joined my tour group and in we went…

First room we visited was the officer's mess, but that wasn't especially amazing. Next room was the control room, definitely interesting! Please excuse the poor photos, hand held photography under dim red lighting is pretty difficult!

The control room was very cool, with control panels everywhere, massive bundles of cables snaking all over the place, and the whole thing just seething in knobs and dials. 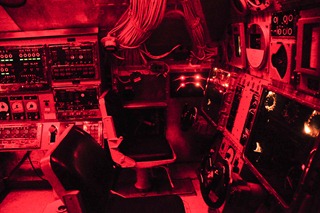 Next we went down the back to the torpedo room… 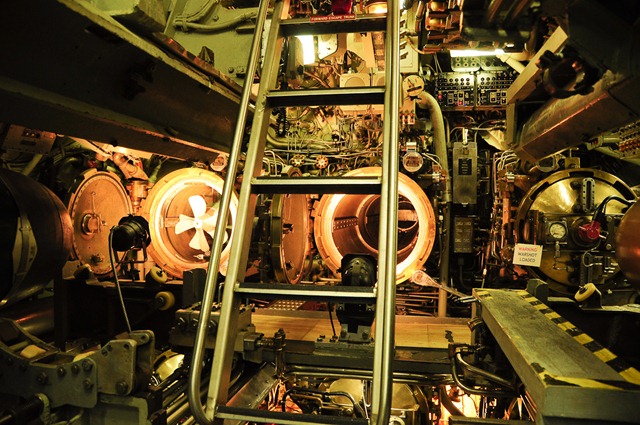 This was another busy room, but positively spacious after the previous rooms. There were quite a few torpedoes sitting in the racks, although obviously all non-operational. The torpedo tubes could be seen too and a few were open, as seen above. 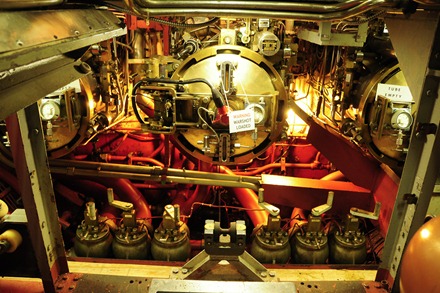 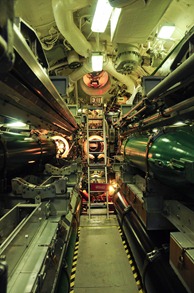 I won't even pretend to understand what everything in here does.

Next room was the control room for the motors and engines. This I understood fairly well. The sub has three diesel engines which run while on or near the surface and drive generators to charge up the massive banks of batteries. The batteries are then used to run the electric motors that propel the sub. When running on diesel power, the generators supply power directly to the motors. It is basically a diesel electric locomotive with added battery storage.

The control room for this part of the ship had a lot of dial and readouts, however most I understood; things like field amps, field volts, armature amps, armature volts, RPM readouts, etc. Everything was repeated 3 times for each of the engines. 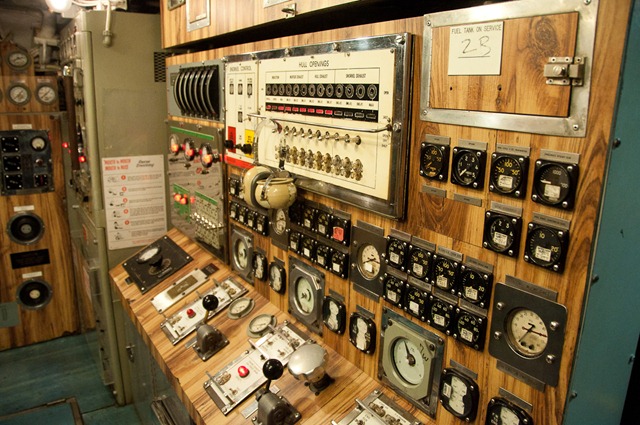 Moving into the next room we saw the freshwater still, which is where sea water is distilled to produce drinkable water. I was surprised that a) distillation would work at all in something bouncing around in the sea, and b) that they didn't use reverse osmosis or just plain filtering instead. 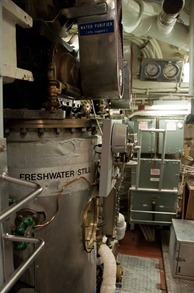 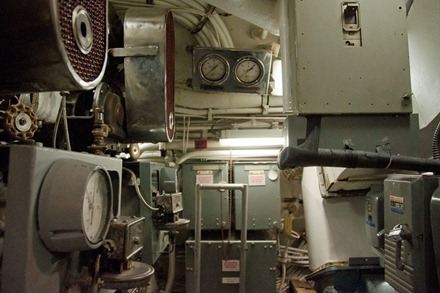 I like the next few shots. The first one shows a corner of one room, packed full of wiring and readouts and even a vice. The second shot shows just how cramped and cluttered the place is with ducting and blowers and electrical cabinets, valves, and so on, all protruding into a main walkway. 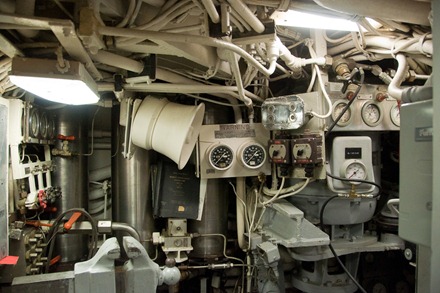 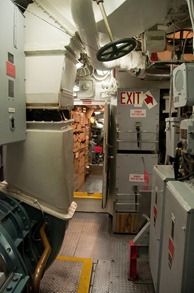 All too soon the tour was over and it was back to the child infested waters of OMSI. I did however record some nice views on the way back: 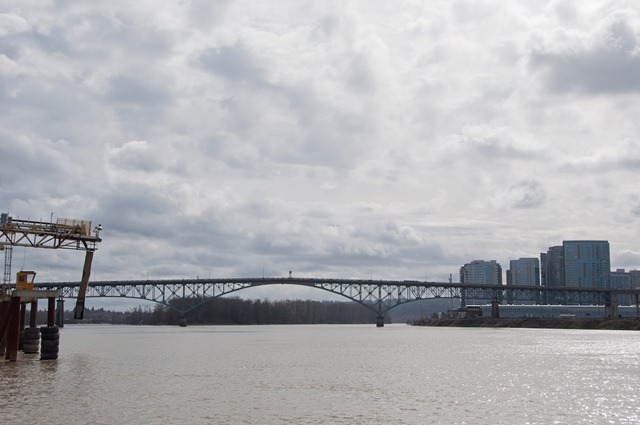 Looking down the Willamette River 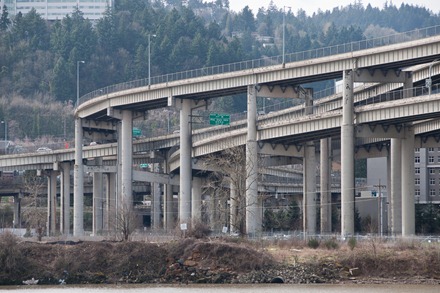 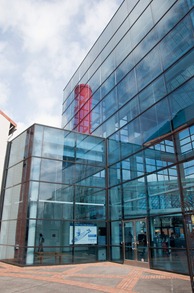 I had one quick last look around OMSI and then headed back to the hotel, utterly exhausted and ready for an early night! Had a rice risotto for dinner and then it was off to bed for me.