Woke bright and early for a big day. Huge snow storm was predicted for Donner Pass today, up to two feet of fresh snow! Starting at 10am. So 10am I was on the road and heading up to the summit. While it wasn't snowing yet it certainly wasn't far off, and by the time I got to Soda Springs it was coming down pretty thick. Almost as soon as I parked a train came through the crossing, so got a quick video of that; hand held, quality could be interesting.

Packed up my backpack with camera, video camera, food, cellphone, and so forth. Then suited up with all my cold weather gear and decided to head down my favourite snow-road to the Big Hole. Walked down to the tracks and found some shelter on the leeward side of a clump of trees. This stopped most of the snow from attacking me, but unfortunately I didn't have a very good view of the tracks. Think I caught a few trains here, and saw the flanger in operation which had been one of my goals. 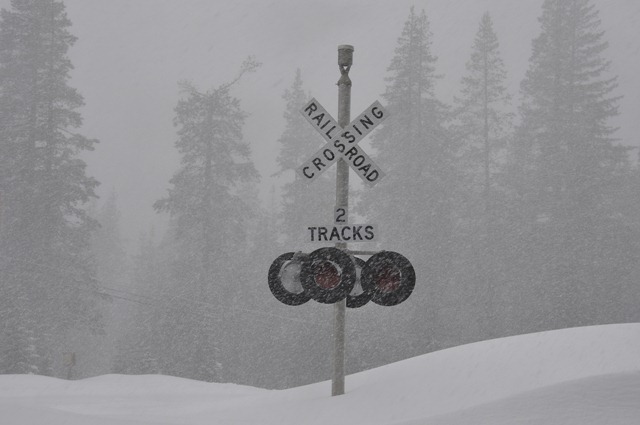 After shooting a bit there I headed back to the car and was surprised to find my footprints already completely covered over; the snow was certainly coming down fast! Got back up the road no problems at all; I'm quite happy driving on fresh snow, it's when it's frosted over a few times, or been turned to slush that it becomes a problem. 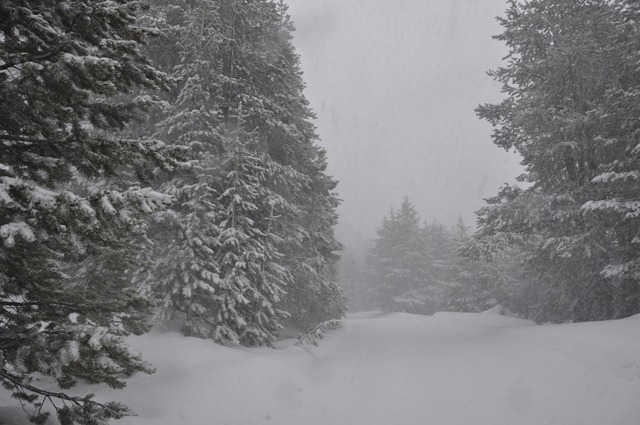 Walk back to the car

Continued down the hill and decided to try some shots at Yuba Gap, about a 15 minute drive. As soon as I hit I80 I knew it was going to take a little longer than that. At one point the traffic was going so slow my GPS decided I must be walking and asked if I'd like to switch to pedestrian mode! About 45 mins later I reached the turn off for Yuba Gap and found that it was passable, so headed on down. Was good to get off the highway; although it was being plowed frequently there was still heaps of slush all over the road, making for a slow sloshy (and in places, slippery) drive. 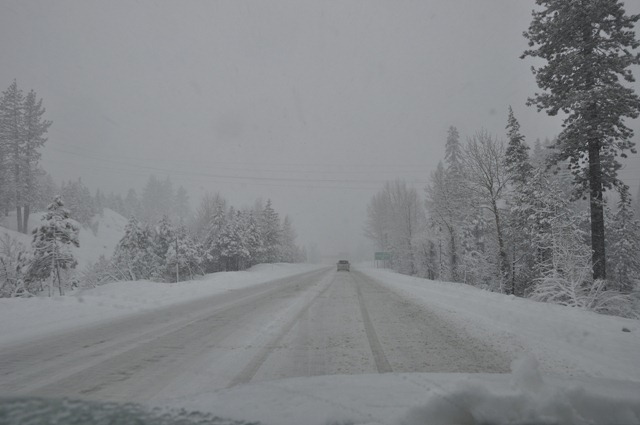 Found a spot to park and geared up. Trudged up the road a bit and then into the snow. Luckily there was a good hard snow crust about a foot down, so didn't need snow shoes. Flanger snuck by as I was walking along; got a quick grab shot: 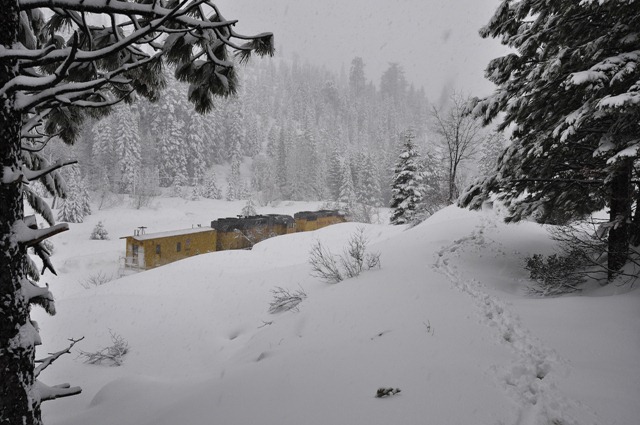 Found a great spot to hide, even had pine needles so I didn't have to sit on snow, and was reasonably sheltered. The snow was coming down very heavily here, so any shelter was worthwhile. Knew the flanger would be back and heard the loco radio to the flanger to lift their blade so knew he was close by. (The flanger plows the snow out of the centre of the track, so whenever they come to a crossing or points they need to lift the blade, otherwise they'd foul it.)

And here he comes: 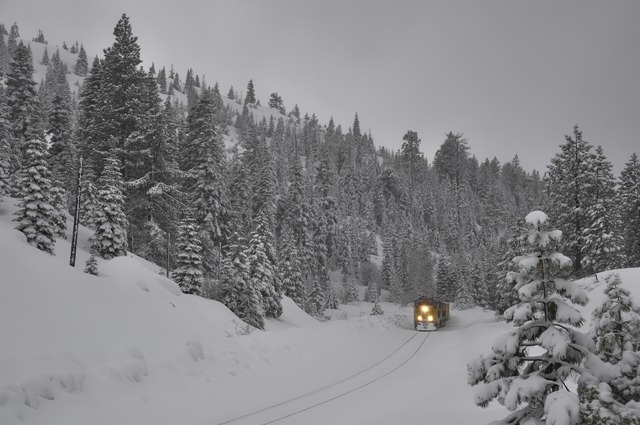 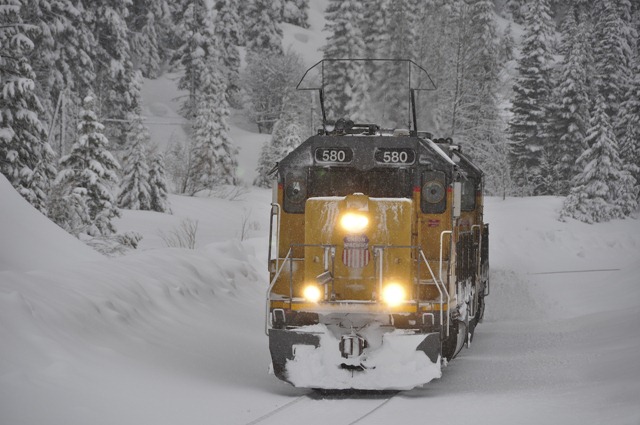 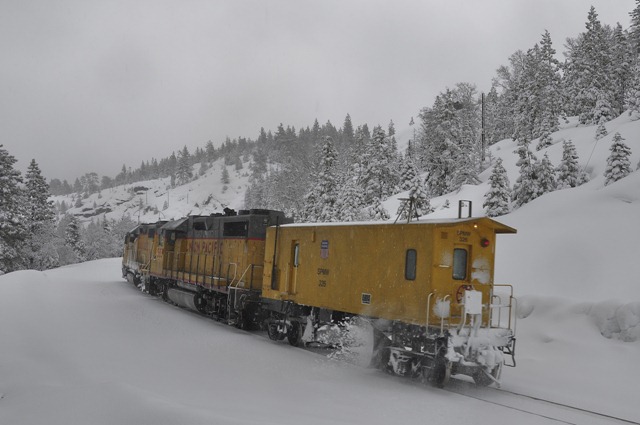 The flanger itself, blade is near the rear bogie.

Sat and waited for the next train. Here is the view from my hideout. A few minutes later the Amtrak Reno Fun Train came past; I'd heard it approaching but just assumed it was another truck on I80 behind me. Didn't have time to get a good shot of it unfortunately. 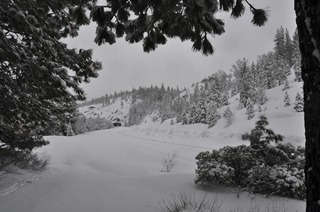 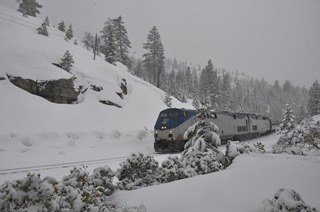 Settled in to wait for the next train, and quite a wait it was. Had a bit to eat, then was getting cold so made a "race track" from my hideout to my viewing area. With the snow all squashed down and smoothed out I could get there much faster, which is important because I only had about 3 seconds to get up, remove my mittens, extract my camera from under my jacket, and get into position before the train passed! Shooting out here in the snow is extremely challenging.

An hour later the next train came. An hour is a very long time to wait in the snow. Got a wave from the driver though which was nice. He probably thought I was mad! 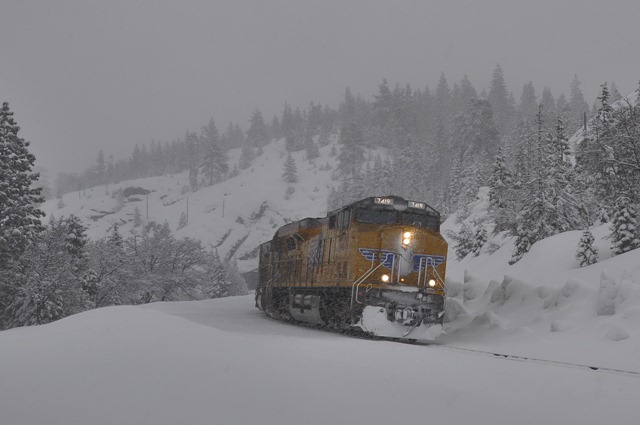 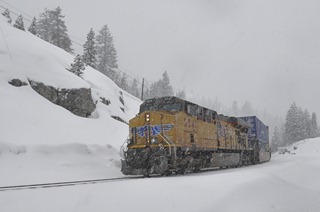 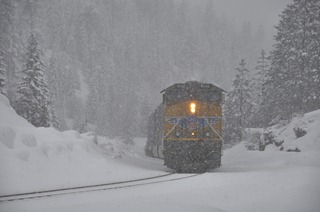 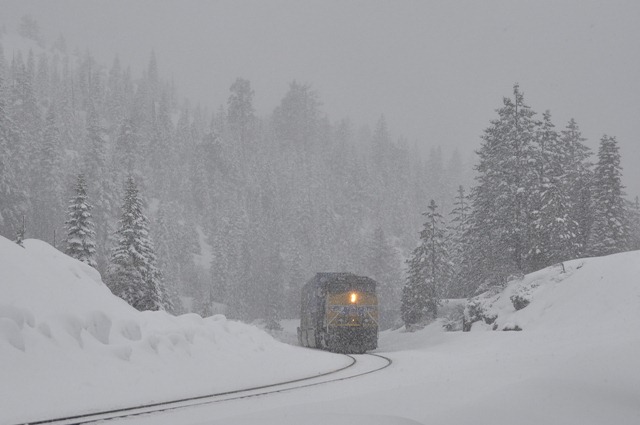 I like trains with DPUs; it gives you two trains for the price of one :-)

Another long wait for the next train; 40 minutes this time. 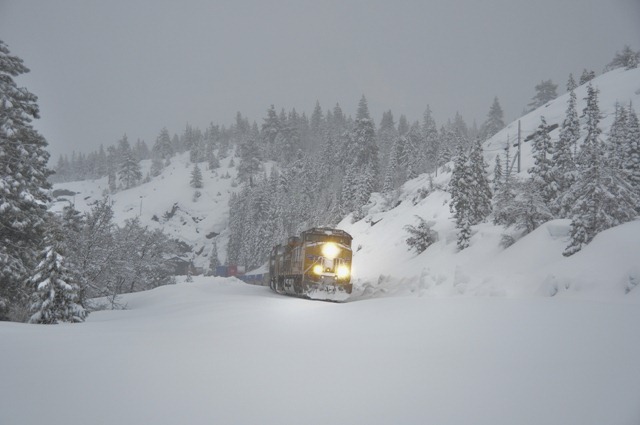 After that it was time to leave; almost 6pm after all. Headed back to the car and cleared off some of the snow. Hopped in and car decided to drive sideways towards the bollard!!! Jumped out and realised the plows had flowed all the gunk on the road onto my patch of road, so now I had 4 inches of snow to clear. Scraped it away and had another go; car went sideways again. Grr! Bollard was getting closer and closer. Finally on the third or fourth attempt I got traction and was soon on my way.

I80 was hideously slow again, although eventually the snow turned to incredibly thick rain and we could speed up slightly. Stopped at the motel in Colfax, only they hadn't checked their email that day and so hadn't reserved a room for me. Drove on to the next nearest motel but they wouldn't answer their door; it was only 7:30pm. Weird.

Finally found a nice place in Auburn. By this stage it was too late for anything but fast food, so had Taco Bell for dinner. Lovely dining experience with one guy walking around yabbering into his cellphone, and another guy making dry heaving noises every 5 minutes!

Only one full day left now, will see what the weather is doing in the morning, hopefully I can get back up the hill.